A must see show!


So much talent! His stage presence is like no other. If you haven't heard of him, check him out. His show is exciting, a get up on your feet and dance type of show. Be ready to sing along with Frankie and his band. I went to the show not knowing what to expect. Found myself singing along to the songs I knew (which were more than I had expected to know). I even caught my Husband dancing along. Even if you don't know any of the songs this guy sings, you'll find yourself engaged in his upbeat personality and presence. If you're in Las Vegas, be sure to check out FRANKIE MORENO UNDER THE INFLUENCE. 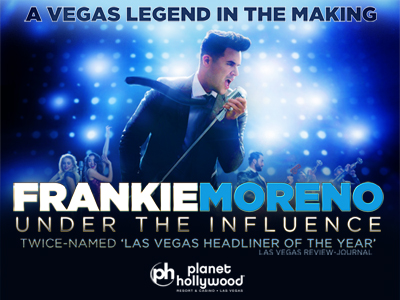 Blending retro vibes with a hip modern sound, UNDER THE INFLUENCE brings to life Moreno’s very personal path to becoming a Las Vegas Headliner.  With his highly contagious music and playful stage antics, UNDER THE INFLUENCE pays homage to Moreno’s major musical influences from Elvis Presley to Bruno Mars, Ray Charles to The Beatles, all presented through Moreno’s unmatched style, fully choreographed band, and stunning visual technology. Each performance will feature Moreno’s hit-inspired original music and reimagined takes on chart-topping songs, as well as signature choreography and performances by professional dancer Lacey Schwimmer of Dancing With the Stars fame.  Hailed as “a show you don’t want to miss” by the Huffington Post and an “extraordinary evening of entertainment” by Las Vegas Magazine, Twice-named ‘headliner of the year’, Moreno is an all-around talent who puts his heart and soul into his music and leaves audiences begging for more!  Source


Click the image to get your TICKETS for Frankie Moreno NOW.

Disclosure: I received tickets for this event.  All opinions are 100% mine.  I am disclosing this in accordance with the Federal Trade Commission’s 16 CFR, Part 255