{Sorry for the late post. It's been a busy month with traveling and Spring Break.}
We have been going to Monster Jam Shows for the past 5 years. This was our first time at the Monster Jam World Finals in Las Vegas! We usually make it an event shared with our friends as we tailgate and enjoy the show with friends but now that we are in Las Vegas, it's just us. Sadly the Hubby had to work. So we dragged along the boy's friend Noah. As a fan, it was his first Monster Jam ever! The night we attended was the Racing Championship! 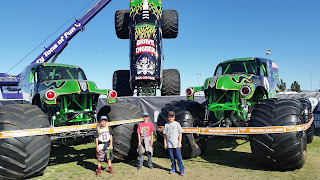 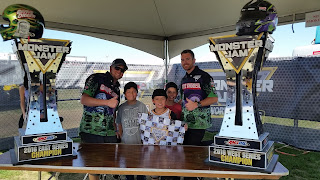 As our first time at Monster Jam World Finals, we were excited to see all of or favorite Monster Trucks and Drivers. Being it was our first Monster Jam event mid day and in Las Vegas, we forgot the sunblock! It was definitely a hot one! The day usually starts off with The Party in the Pits. This is an event we look forward to almost more than the show itself. My boys love getting up close and personal to all the trucks as well as meeting the drivers and getting autographs. In the past we years we had always missed out on getting to see Grave Digger and getting autographs because the line was always very long or limited! So this year, our goal was to go straight to the Grave Digger trucks. Unfortunately we didn't get to see the main driver Dennis Anderson, but we did get to meet Morgan Kane and Cole Vennard! At the end of the Pit Party, the Monster Trucks and it's drivers parade down the road into the stadium, This was a first for us. This made the fans more excited and got the drivers pumped up for the show. Below is a video from the parade. 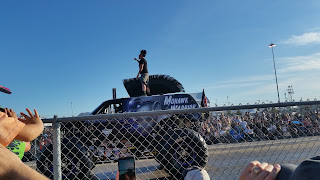 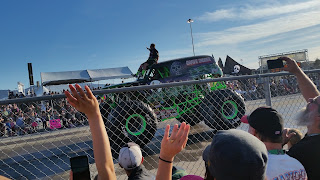 After the parade they opened the stadium to let us into our seats. We were praying we had good seats as well as in the shade! Thank goodness! We did! Perfect seats and the shade. We had an hour until showtime so I took full advantage of social media and did some posts while we waited for the show to begin. 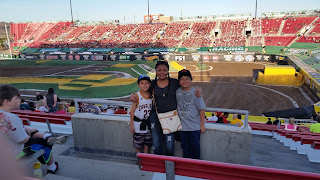 The trucks start the show off by parading around the track once again. Being that we were at the racing championships for the World Finals, it was all about speed and time. The best part were the jumps. The air that some of these trucks can get are amazing. It makes the crowd go wild! 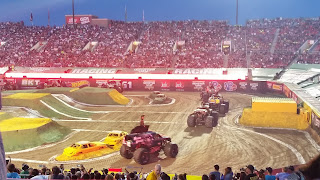 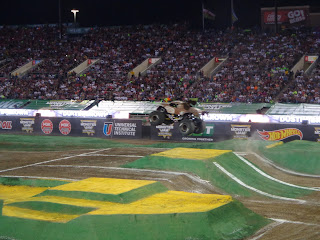 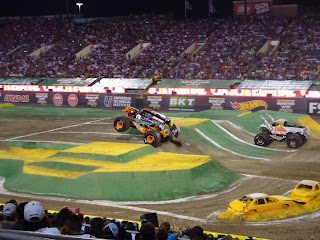 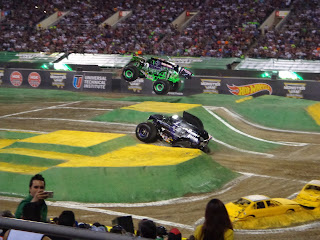 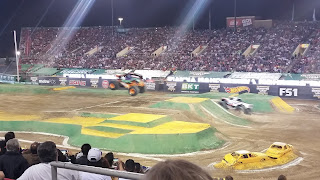 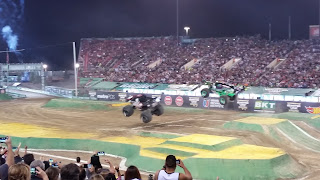 If you have never experienced a Monster Jam show in your town....definitely look into it! It's great for the whole family. Remember to dress accordingly and to bring ear plugs!! When we went for our first year in 2011, we didn't know what to expect. After the show, the family and I were in awe and had so much fun. We were definitely hooked after the first show. My boys became obsessed. Started to learn more about the trucks, the drivers and everything else Monster Jam. They even started collecting the Monster Jam Truck Hot Wheels! And if you want to kick it up a notch...visit the Monster Jam World Finals in Las Vegas! This runs every March!!

Disclosure: I received tickets for this event. All opinions are 100% mine.  I am disclosing this in accordance with the Federal Trade Commission’s 16 CFR, Part 255