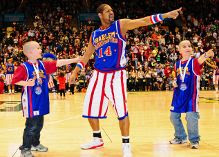 Another successful, entertaining night with the The Harlem Globetrotters in San Diego! My family and I have been watching the Globetrotters for the last few years.  I have grew up watching them as a kid and I love that I can share the fun with my kids now too.
The night began by watching a few kid leagues play basketball before the show started. This was fun for my sons because they both play in a basketball league too.

"Globie" the Globetrotter Mascot always makes an opening appearance and that really gets the crowd excited for the show. Later the "Generals" were announced as the opponent of the Globetrotters. The excitement grew as the Globetrotters came out. Each announced individually by name and had a trick or two to showcase themselves. My boys were excited that two of the four players they had met at the past Summer Clinic's were at the show. Handles and Hammer were two of their favorite players. My favorite of course is the female, T-Time. Not only is she a talented basketball player...she's beautiful!
Did I mention what great seats we had? Thanks to US Family Guide, my family and I received 4 free tickets to the Harlem Globetrotters Show. Despite just having shoulder surgery, my family and I enjoyed our time! We also brought two friends with us, which they too love basketball and enjoyed the show! As always the Harlem Globetrotters know how to entertain and make the crowd laugh while enjoying a fun basketball game. They will always be part of our family. My family and I have made it a tradition to see the show every time they come into town.

Disclaimer: I was provided tickets to the Harlem Globetrotters show in exchange for an honest review as well as sharing my experience.