What is a Fabulous Falcon?
Those students who displays the proper behavior for the month. For the month of September it was: RESPONSIBLE.
Last month my son was awarded the Fabulous Falcon for September but the ceremony was on a day we were in Las Vegas for The Blogalicious conference. I was so excited for my son, and very proud but unfortunately I had to tell his teacher we were going to be out of town and he was missing school. She didn't mind and had him awarded this month, October. The kids are always kept in the dark about who is the Fabulous Falcon of the month until the awards ceremony.
That morning we (Hubby, Kameron and myself) dropped Konnor off at school as we normally do. We later turned around to park to head to the multipurpose room for the ceremony shortly after school had started. As we sat in the room, all of the 1st Graders slowly trickled in. My son peeked his head in an immediately saw us all there. It was the cutest thing. As he walked down the aisle and saw us, I gave him a little smirk and he gave me a playful, but angry smirk back because he knew what was going to happen. (Basically, only the parents of the awarded student is invited to the ceremony.) So he knew that he was chosen and that we had kept it a secret. As the teacher calls the student up front, a little note is read on why the student was chosen. You can see it below. I'm so proud that my son can practice and show great responsibility at school. He also received this award last year from Kindergarten. Great job Konnor! Mommy and Daddy are so proud you enjoy school, have excelled tremendously and can be a great role model to your peers. We love you! 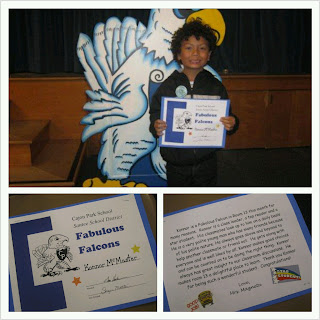 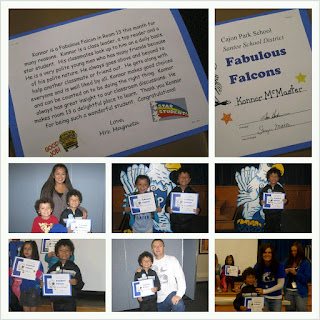