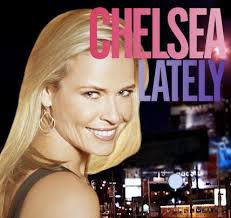 Thanks to On Camera Audiences, INC, (MyTVtickets.com) I won a lottery on Facebook for sold out tickets to Chelsea Lately. Not only was I able to get tickets, they were PRIORITY tickets. I am a big fan of the Chelsea Lately show and love Chelsea Handler and her stand up comedy. My friend Sherry and I took the 2 hour drive to Los Angeles on Tuesday morning. We were so excited. We were hoping to see our favorite comedians on the roundtable. I was the show nightly and always find myself laughing, even if it's by myself. My favorite roundtable team would be: Josh Wolf, Jo Koy and Ross Matthews. The drive up wasn't bad at all and we enjoyed the girl talk time and quality girl time.
We got to the studio, saw a line of people and thought, "Oh goodness, a long line." Really, it wasn't that bad because we of course had priority tickets. The person checking in the guests walked us to an area where only 4 other girls were sitting. We waited in line for a short while, nothing like we had thought we would. Once we got through the security and "rules" we walked into the studio and were seated...second row baby! We were so excited. We sat and stared at the stage, the seating and everyone else who came in. The Audience Producer went over some tips and rules about the taping, made us practice our clapping and applause.
Our highlight....Jo Koy was on the roundtable, we met and chatted with Jo Koy's Mom. We were also invited to stay for another taping.
Here's a message I left for OCA
"Just wanted to thank OCA for the tickets to Chelsea Lately. A friend and I went yesterday and had a BLAST! My throat hurts from screaming, my cheeks hurt from laughing and my hands hurt from clapping! I ♥ Chelsea and her roundtable. We had hoped to see Jo Koy on the roundtable...and BINGO..he was there! We sat in priority..second row right in front of Chelsea! We even met and chatted with Jokoy's Mom in the audience and shook Jokoy's hand outside. We were lucky enough to get into a second taping afterwards. Again, Jokoy was on the roundtable. It made our day! Thanks again!!!!"
After the show we cruised around the area. We went shopping on Robertson Blvd, went to the MAC Pro Store and bought some things. We thought about eating at the famous restaurant  The Ivy, but decided to go for a burger elsewhere. I love LA because you can usually see a celebrity or someone famous. Unfortunately we didn't hang out around long enough. We should've sat at The Ivy and hung out. I'm sure by the late evening/night we would've seen someone! We also cruised around Santa Monica Blvd, Wilshire Blvd and Beverly Hills. It was fun. My girlfriend Sherry and I had many laughs and great talks while on t his little roadtrip. It's something much needed from time to time. 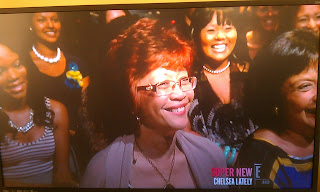 We came home that night just in time for the to watch the first taping we attended. I still laughed and giggled as if I was in the studio. Although I wasn't in the shot, my friend Sherry was. That's her on the right with the big cheesy smile behind Jo Koy's Mom as she was part of one of the segments. I was sitting right behind Jo Koy's Mom.
It was a long day...but a very well deserved and fun day with a great friend.