I was raised Catholic by my parents and especially my Grandparents. They played an important role in Catholicism as I was a young girl. Sundays at church with my Grandparents are some of the most memorable times with my Grandparents.
I did the traditional baptism, CCD, made my First Holy Communion and attended church. As I got older and on my own, I strayed away from the church for a few years. Every now and then I attended mass, but not as much as I should have, or would have liked to. For years my Mom and my Grandma used to encourage me to complete my confirmation, but I never did. I remember my Grandma telling me I could never get married if I don't make my confirmation.
When the time came for me to get married, I didn't worry about my confirmation since I was going to marry someone of a the non catholic church. Marrying within my religion was not of importance to my family and myself. It was the love and how he treated me that mattered most. We were married by my good friend's Dad who was a Minister. He had the best sermon.
5 years later, my Grandma had passed away. I had a tough time dealing with it but I knew she was in God's hands. Later came time for me to finally get serious in getting my confirmation from my church. It helped me feel closer to my Grandma, knowing she would have been proud. I also did it for my Best Friend, soon to be God Daughter and myself. 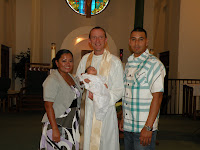 For 3 months I dedicated every Thursday to attend the RCIA (religious eduation) to This past Easter, I received my confirmation just as my Grandma would've loved to see. It was a bitter sweet moment for me. I was proud because I knew she was looking down on me, smiling. And I was happy to know that my kids were seeing Mommy do something that was important to my faith, my family and myself. In doing this I was able to officially be a God Mother to my bestie's first born baby girl, Madisyn.
Though my Husband is Lutheran, we raise are children as Catholics. I believe everyone has their own beliefs. Whatever way you want to believe, is your own. I am open to learning about other religions, but I would rather not be "preached" to. If you believe in one religion, please don't try to sway me to another religion.
Simple as that.