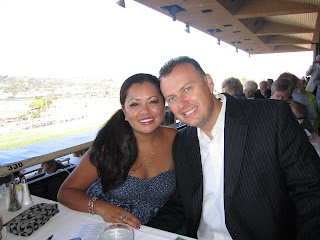 So my Hubby and I (and a good friend of ours) went to The Races at Del Mar again on Saturday. How were we lucky enough to get a "date" out together twice in one week?  We were excited all week about going to the races again, but we were most excited about the concert afterwards..WEEZER!
We started the day with a driver picking us up so we wouldn't have to worry about drinking and driving. (If you're in the San Diego area, check out AB Viking Limo. Be sure to let them know Kevin & Melanie McMaster sent you.) We picked up our other friend, Frank and headed to the racetrack. All snazzy and dressed up we arrived in Turf Club. If you're familiar with the Turf Club, you know that it's for members and their guests only. It's typically high class and we all know we're not rich like the rest of them. Luckily we have connections and are able to enjoy this area of the track when we go. We had appetizers and lunch while betting and watching the races. Down on the paddock are normally the owners of the horses. We of course are NOT owners of any horses, but were able to check out the scene and get a closer look at the horses we were betting on. 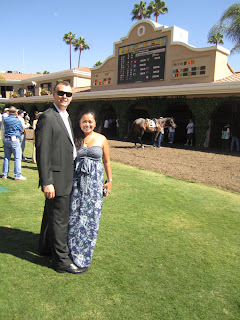 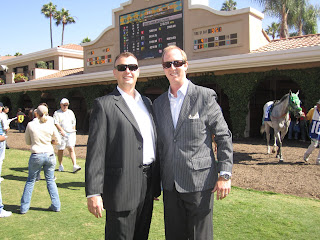 My Hubby on the left and Cousin Frank on the right  posing for a picture on the paddock. 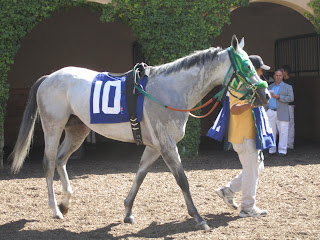 Horse #10 (forgot the name) but was intrigued at the color of the horse. Of course...it was one of the last horses to come in during its race. BOO! 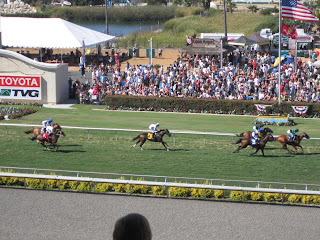 A shot of one of the many races we "almost" won as our horses we chose were in the lead...until the last stretch. Boo again! 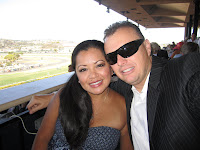 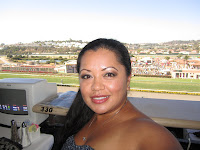 Hubby and I getting a shot of us two again. When with the kids we never get photos of us together.

On to the concert......
It was an amazing night. We had VIP tickets which meant we got backstage in a gated area. What we were later surprised with is getting backstage PASSES! This meant only the inner circle, with the other family and friends...basically right behind the speaker! I literally stood behind the right stage speaker on the ground level. It was a perfect (side view) of the show. I love that they played of course their hits and other songs. Even did a cover from Foster the Peoples "Pumped up kicks". One of my favorites from them are "Island in the Sun", "Beverly Hills" and of course "Buddy Holly". But the best part was meeting the band members (two of the four) and hanging out and chatting it up with them as we do with our own friends. 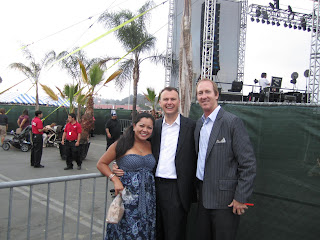 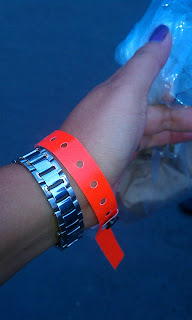 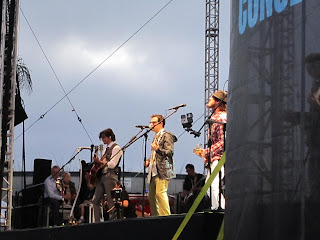 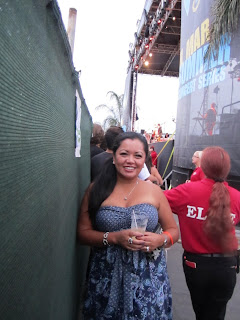 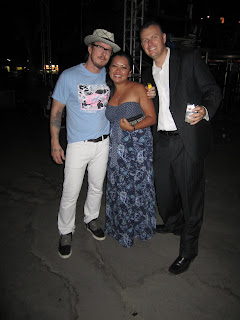 That was the best way to end my night!!!!
Were you at the concert?