Today's SocialMoms blogging prompt was submitted by member Shannon Flora, who likes blog giveaways and frugal living and blogs at Shannon's Tales of Motherhood. You can connect with her on Twitter @shannon717717 .
How do you feel about your kids playing with toy guns or weapons? -    Do you allow your kids to play with toy guns or weapons? If so, what is an appropriate age for them to start playing with toy weapons? If not, what is your reasoning?
We used to ban my kids from playing with toy guns or even using the motion of playing guns. This included plastic toy guns, water guns, NERF guns or toys that had guns. My husband and I own guns and are VERY safe with guns. In the past year we've taught our kids the proper safety on guns and although they are still young, they know NEVER to touch a gun if they see one. My brother made the mistake of giving them a NERF gun for Christmas last year and before I could hide it, the boys ripped the box open. So that was the beginning of "toy guns". 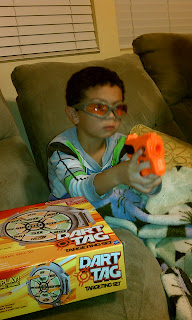 We have since allowed our kids to play with toy guns. We still teach them never to point really only own waterguns and NERF guns. I'm still a bit "anti" toy guns with any toy that them directly at someone and to play "safely" with them. If they ever point or directly hit someone with the dart (or use the action) of actually brutally shooting one another the toys get taken away. They've actually taken to the understanding very well. They understand toy guns are TOYS. We reiterate safety alot and we test them on things we've told them. Hubby especially teaches them "do not put your finger on the triger until you're ready to shoot." 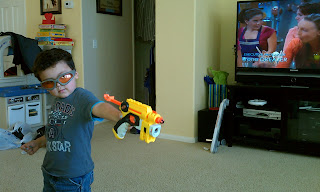 So how do you feel? Leave me your comments!
Join in on more topics on Social Moms Daily Blog Prompts