Another week of Summer vacation has gone by. I missed last weeks post because we've been so busy. Trying to keep my two boys busy during our Summer days have been tough. We have our "Summer Bucket" but it feels like we're on the go most of our days. For this week I have failed at giving myself ME time. I haven't really done anything for ME that I can really think pops out in my mind. Bummer! But fortunately everyday I enjoy being with my boys so that is always a positive. Of course Mommy needs her ME time, but watching my boys grow and learn is the best thing I can ask for.
So instead of the ME challenge, I will just write about how our week has been... 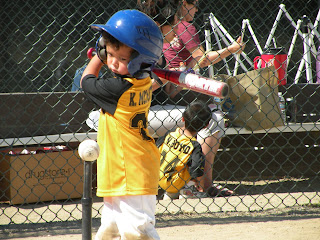 We've tried to stay out of the pool a bit, but that doesn't last with my boys. They are like mermaids, or "Fish out of water". They get antsy and BORED when they don't get in the pool on a daily basis. On the weekends we are busy with Kameron's tball games as well as once a week during the week for practice. He's loving it. He's learning so much and so quickly. He's having a blast and loves his Coaches. He had his team photos this week which were fun. It was so cute seeing all the other teams. A bunch of 3 and 4 year olds in uniform are so cute. I can't wait to get the photos because Kameron was sure to practice his smile and pose days before his photo day. =) He has had 3 games already this season and is improving every week. We're so proud of him. He's more of our power hitter and his older brother is more efficient in outfield. Although with Kameron, we've had to teach him it's not just about batting, he has to learn to be outfield too. His favorite part of Tball is batting. Hopefully we'll have another All Star on our hands. 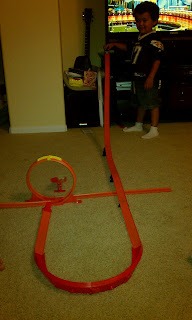 We've been having movie nights once or twice a week. We've been watching old movies like The Karate Kid (the original), Street Fighter, Little Rascals and others. We took the boys to watch a movie they've been working hard to see as their reward..Transformers: Dark of the Moon. I enjoyed it just as much as they did. They are very into typical boy things right now so it was obvious what movie they wanted to see. We've played with Hotwheels a lot this week. I even enjoyed making a track for them.

I've been noticing that my oldest, Konnor has been having a rough time behaving lately. I don't know what has come over him but lately he's been very rude, misbehaving and not listening. I've had to put a lot of attention to him these last few weeks. Hubby and I have sat him down and scolded him and talked to him but he still chooses to act out. I'm hoping it's just a few bad days and won't be lingering all Summer long. Or I may need more than just a ME day!!!

Of course I had my weekly manicure. That seems to be the one thing I do for myself alot. Second would be playing with, or organizing my makeup cabinet. Here's the color I had for the week. It's Fresh Teal by Milani. I've also been trying to "embrace my curls". If you read my post about Unruly, Frizzy hair you'll understand how frustrated I am with my hair and its curls. I found some other products that I was curious about. I will probably be doing a whole other post on my hair update. It's a whole different rant in itself!
We're taking the boys to their first Ringling Bros. circus on Sunday. We're all excited, it's been years since I've gone to a circus. I used to go alot when I was younger. We also have a trip planned to my parents house for a few days. They live in Northern California. It'll be a nice (but quick) trip to see family and see my new Niece who I've yet to meet. My Nephew called me today asking when I was coming. It was so cute. He's excited to see me and his cousins.
Happy Friday!