The making of a Superhero

As in a previous post you've all seen my sons and their love for SUPERHEROES. Well when we were invited to a Superhero themed party they were thrilled! They immediately started planning on which Superhero they wanted to be. Their obsession has become insane. I don't know where it started or how. It's been about 8 months since Konnor had been interested in Iron Man. It started with Iron Man and has snowballed into the entire Marvel and DC Comics


My oldest son Konnor thinks he is IRON MAN. He had quickly become obsessed with Iron Man last year, Halloween. 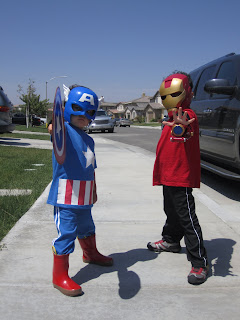 Kameron decided to be Captain America for the party. Both of my boys have the Marvel Masks (from Target) They have Captain America, Iron Man, Wolverine and Spider Man. The only one they don't have is Thor, but I'm sure they'll be begging for it soon. So in preparation I decided to make a costume for Kameron.
I started with the shirt. He had a shirt and pants that matched. The perfect blue. It was an inexpensive outfit I purchased from Walmart a few months ago, but he never wore it. He also needed a shield to complete his look. Red boots and red gloves were on the list, but we weren't able to find red gloves. The red boots were originally green which I found at Target on clearance for $4! I think they were gardening boots, but as a quick DIY costume, it worked fine. My son was so excited for me to start this project! I couldn't help but to be excited too. I knew how happy he was going to be.


Supplies for the shirt, shield and boots
Blue shirt
Blue pants
Fabric paint
Paint brushes
Boots
Acryllic paint
Acryllic finish
cardboard
I printed a stencil for the star and used a ruler as a guideline.
﻿﻿﻿ ﻿  ﻿ 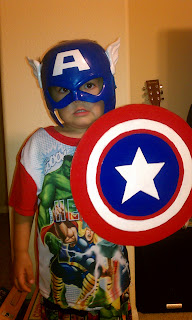 I participated in the Sunday Showcase. Check it out and join in on the fun!