I'm a bit late at posting this because unfortunately this week was NOT about ME at all! It was such a busy weekend I neglected all social networks and am just now playing catch up. Let's just say it was a B-U-S-Y weekend to say the least. Maybe add hectic, on the go and tiring to the list.
My weekend was busy, hustle and bustle for all things KONNOR! My oldest son had dress rehearsal on Thursday for his Spring Concert on Friday. This was a quick rehearsal for all of the performers. They all aced rehearsal and were so pumped for Friday's concert. The playlist for the concert were all great songs I was even more excited to watch and listen to these talented kids perform!! 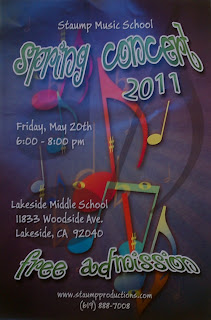 Friday was the Staump Production Music School Spring Concert. It was an exciting day for us all because all of the kids in the school had worked so hard for this concert. These kids are so unbelieveably talented and well rounded in all instruments. This is our second year being with the music school and attending a concert. It's so pleasant to watch the talent that performs at their concerts. Last year in the Fall Concert he had performed in the finale song lead by his music teacher Maria and the whole group in You and ME by Dave Matthews. This year Konnor performed in "We Will Rock You". All the kids ROCKED IT! (Konnor is the one in the purple plaid shirt.) 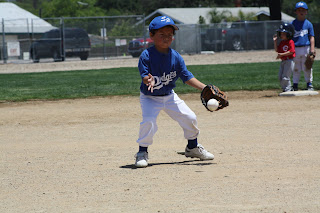 Saturday morning was tball. It was the last Saturday game of the season. Thank goodness cause our Saturdays have become so hectic. It's a challenge for us to spend our Saturday mornings in town and filled with tball activities. We are used to having our Saturdays to do family things or to go out of town. But this year we have decided to slow down on going out of town and on vacations to allow Konnor to focus on his extracurricular activities. This meant no vacations for us, or as many as we'd like.
Afterwards the kids took a dip in the pool to cool off and then we headed to a graduation party for my cousin.
Sunday was Kids Day (Little League) at the ballpark for the San Diego Padres game. This was my boys' FIRST MLB game, and first San Diego Padres game! It was an exciting day for the kids of SPNLL. Together with thousands of other Little League Teams, the SPNLL Dodgers walked the field before the Padres vs. Mariners game on Sunday. Exciting for my son and his team, they were also lucky enough to be the FIRST in line out of thousands of teams and their players. On top of all that, since it was KIDS Day, all kids 13 and under received a SD Padres hat. My kids were very excited about that! GO DODGERS!! (even though we were at a Padres game LOL) 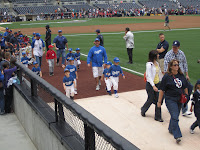 The Dodgers walking in first..and look at the trail of other Little League kids following behind! Unbelieveable sight! And so cute! 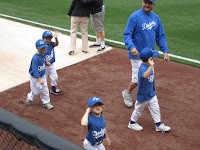 Konnor waving at us in the stands as he follows his Coach and walks with a team mate. Amazing to see him (and all the other kids) on the big screen in the middle of the ballpark!
He was all smiles as he walked and heard everyone cheering and especially Mommy and Daddy. The faces of all the kids were priceless. They felt so important and special. ﻿ ﻿﻿After the walk, we finally got to sit down and get ready for the game. Konnor's highlight (besides walking the field) was hearing "PLAY BALL" at the beginning of the game. 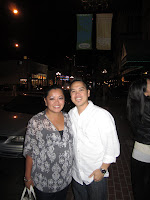 Sunday evening Hubby and I were able to take the kids to Grandma and Grandpa's to go out to dinner with a dear friend who was in town. I hadn't seen this friend in 5 years! We remember because it was at my Baby Shower when I was pregnant with my oldest...who is now 5! So it was nice to meet his Fiance and catch up during dinner. Since they were staying downtown in the Gaslamp District, we decided to have dinner at Trattoria La Strada in the heart of the Gaslamp.  If you haven't been to Trattoria La Strada and like Italian cuisine, check it out. It's great and even better to sit outside and enjoy the array of people that walk the streets of San Diego's Gaslamp. 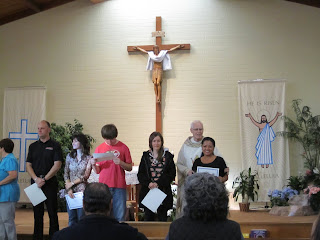 Ok, so maybe it wasn't ALL for my son. Thursday evening I was presented with my confirmation certificate from my church; Guardian Angels. I took part in the ceremony at the Easter Vigil mass last month, but on Thursday we were officially ending the RCIA and Confirmation process with a mass for the Catechumens, Candidates and their families. I was happy to have my family in town and my parents were able to attend this mass and reception dinner with me.
So that was my ME Challenge for Week 3. The one thing I did enjoy was being with my FAMILY! This included my parents and my brother. (My sister was the only one not around since she lives far and just had a baby.) But overall it was a busy few days for us.
How did YOU spend your weekend? What did you do for YOURSELF??