Do you have a alter ego?

a hero, especially in children's comic books and television cartoons, possessing extraordinary, often magical powers.
It's a bird, it's a plane...nope, it's IRON MAN and SUPERMAN!
My handsome Superheroes at their best. 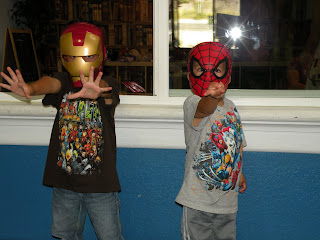 My boys have taken liking a toy or character a bit far. There have been some days where they act out a comic or cartoon in its entirety. I sometimes have to stop and watch as they act a Superhero character out and act as though they are saving the world, one villan at a time. It all started with my oldest liking Iron Man. I'm not sure how he started liking it because he had never even seen the movie. More and more he would see the toy or the movie and scream, "IRON MAN". I tried so hard not to fall for getting him anything Iron Man related, but he ended up getting something as a gift for his birthday and it all went downhill from there. To me, comics were more of an older boy interest. My son is only 5, that meant  no more Toy Story, Cars, Blues Clues and kiddie things. He was growing up...too fast!
Yesterday I surprised the boys by taking them to Kid Ventures in Pacific Beach for the "Superhero in Training" party. As obsessed as my boys are with Superheroes, I knew they would enjoy it.
Of course it wouldn't be complete if they didn't dress up so since they didn't know where they were going, I just had them wear their Marvel shirts. I brought their Marvel masks and had them choose which one they wanted when we arrived.
Of course, they were the only ones with masks! But the other kids were just as excited. The kids learned to do flips, "fly" like a Superhero, kicks, tumble, swing and balance. It was all held next door at Gym Ventures. Padded walls, floors and under the supervision of a great instructor! *WHEW* The smile on my boys' face were priceless.
The one thing I had to remind them: "Do Not Try This At Home". And thankfully the instructor told them the same.
Do you have an alter ego in you??