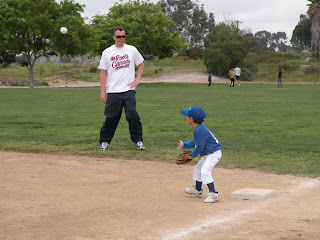 So tball season is in full effect. Konnor is officially learning and having fun. It took him awhile to get used to the extensive practice and game days. This weekend at his game he played 1st base and made a great play. He caught the ball and even though they don't have "outs" in tball..it would've definitely been an out! I was so proud and when everyone applauded him and cheered he turned red in the face and had his bashful face. He didn't know how to react. I was so bummed that I missed the opportunity to catch the shot in photo and in video! The picture on the left was an actual CATCH! I can't believe I missed the play. 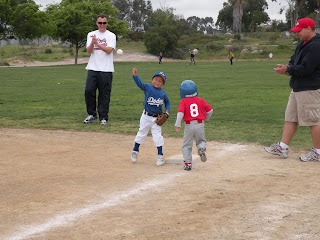 And to the right, the picture of the priceless smile on his face while everyone cheered him on (even Daddy who was Coaching during the game.) It is so cute when the boys of his team is out there playing. I didn't realize how much I would enjoy being a part of this new sport and extracurricular activity. He's met new friends and Kevin and I have met new friends as well. It's still early in the season so we have many more fun times ahead. I have to admit it has taken some getting used to (the busy schedule and making changes in our schedule). Later dinners, less time relaxing at home or doing other Saturday morning things, but it's ok. As long as he's enjoying it, we're happy for him. It's also good that he's getting exercise and learning how to play as a "TEAM". He really listens to his Coach and enjoys practice. It helps that his little brother is also enjoying watching, being one of his biggest fans. He also says he's ready to play soon too. Which of course won't be until next year. Although we see Konnor's passion in music, (drums, keyboard and guitar) it's good to know he is willing to try things. As he sees other kids his age enjoying it having fun, I can see it in his eyes how much he's having FUN. 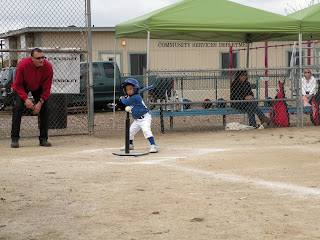 Is your child in a sport or have an extracurricular activity? How do you as a parent keep things together?