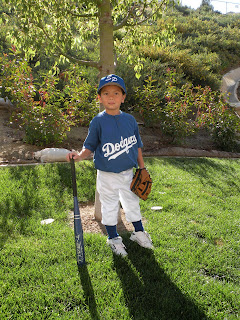 So it's my oldest son's 1st year playing in Little League. He chose to play Tball this year even though he is still doing his music lessons at Staump Productions. I was the one who was hesitant of adding another thing to our already busy schedules. Although I thought he was doing too much, we decided to let him try it out. A new student and a new tball player, let's see how well he could hang through his new busy schedule.

Yesterday was the big day. Opening Day for Little League. It was a day of pictures with the team, opening ceremonies and some games. TEAM DODGERS!

Despite waking up with a high fever, my Little Man toughed it out, took his team pictures, engaged in the opening ceremony and smiled throughout it all. His first game is this Tuesday which he is so excited for. So we're hoping he can get over this fever and cold so he will be ready to play on Tuesday.


Konnor has been amazing with his strive to learn and play even though he's probably tired and exhausted after school or music lessons. But he gets his equipment and is ready to be practice with Daddy and his team when we get to the fields. With just a month of practice he has been able to learn more of a "team work" environment and has definitely improved his skills of catching and batting. And when it's time to run...boy can he run. I'm hoping the activity and energy he's burning can help him improve his appetite. So far, he's eating more...but still not willling to taste other foods and try.
Practice is twice a week and he will now be having 2-3 games a week. Busy for a little 5 year old huh? When his schedule gets busy..mine gets more hectic! With all things aside, it has taken a lot of adjusting (and more of it) since he has started Tball. I enjoy watching my little man and Daddy have some one on one time together. It helps us all as family get out and practice on other days. We can't wait for the games to start so we can cheer on our little guy and his team. He is enjoying his Coaches as well as the new friends he has made on the team. Below is a picture of the full team 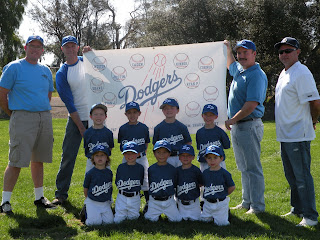