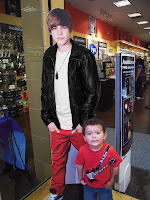 If you know my boys you know how much they admire Justin Bieber. They know every song, word for word, have his books, stickers and watch him on every show he performs on. This week alone my DVR has been set for the daily shows he has appeared on to promote his new movie.

I learned about him from my oldest, Konnor (4) early last year. I am not sure where he learned about him, but he kept mentioning him and wanted me to buy his CD. Luckily most of his marketing is geared towards girls, so I don't have to indulge in buying every single Bieber product out there. I know the feeling all the girl fans in the world. When I was younger I was a huge NKOTB fan. I remember screaming everytime I saw them on TV, in the stores...etc. I had my own Mom buy everything in the stores. 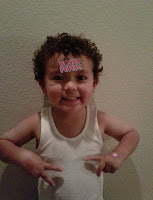 So no, I am not ashamed to say it but I know why he has the fanbase he has. He's a talented boy!! I admire his talents. From drumming as a little boy, playing several instruments and singing...he is amazing. My sons (especially Konnor) are drawn to his talents. As an aspiring musical artist himself, he loves watching JB perform. 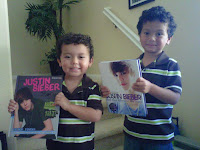 This week he has his own movie coming out, a documentary of his life. Ok, all sixteen years of his life. From what I've seen the story he is followed by cameras through his world tour and the story of how he became the superstar he is today. My boys of course have been excited and have been reminding me everyday, counting down. I plan taking them to see the movie as our early Valentines date. Never Say Never 3D
Justin Bieber is definitely a positive role model to the kids out there. And I'm not ashamed he has gained fans out of my boys and I.