﻿﻿﻿﻿﻿﻿﻿﻿ We've noticed for a long time now how much Konnor loves music, instruments and his dream of being a "rockstar". His favorite groups and  singers are people like the Jonas Brothers, Miley Cyrus, All Star Weekend, Justin Bieber and Big Time Rush. As early as a few months old he was always facinated with music. He would watch a show called "Hi-5" on tv that was a toddler/kid show that taught kids by singing and dancing. He would sit in his bouncer or swing and just be so happy watching. He fell in love with the show as he got older. We bought him all of the DVDs and the CDs. He wanted to watch them in the car and while at home. And anytime he could he would listen to the CDs. He started to learn the words for the songs and would start to sing along as he started to learn to talk. He even ﻿
﻿went to the Hi-5 concert when they were in San Diego. Up until he turned 3 yrs old he watched it daily. Then he turned to Disney Channel's Imagination Movers and wanted to be like them. They too sang and danced and captured his heart of music. We also took him to that concert all the way in Mesa, AZ in December 2009. So needless to say he became quick to learning lyrics to different songs. Not just kid music, but even other genres. If he heard it, he would sing it. Maybe not the whole song, but he appreciated music. Suddenly he became more interested in wanting to learn to play an instrument. I kept telling him he would have to wait til he was a certain age.

We recently decided to find a music school for him to start lessons. After talking to several people, I found a place close to home to take him. He started his first lesson last week and was so excited. Staump Productions Music Lessons
﻿﻿﻿﻿﻿
﻿﻿﻿

Maria and Tim Staump of Staump Productions Music Lessons were a great match. They are great with kids and have a great method and attitude about teaching to music to kids. Maria is a composer, songwriter and  musician. While Tim is also a muscian and according to Konnor, "he rocks out."
Do you think his passion for music has anything to do with me playing music daily while he was in utero? Or singing to him while I did housework while he was in my belly?  I don't know what it is because Kevin and I are not as musically inclined as I wish we were. Yeah, I love music, dancing and singing. I did play piano when I was younger but never "wanted" to, I was just forced to. With Konnor, I never have to force him to play or practice. 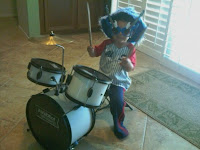