So I'm a bit behind on blogging. It's been a busy year for everyone, especially with The McMaster's! It's mid October and Christmas will be here before we know it. We're in no way ready for that! The boys will be one year older and that much more wiser!

We've started this October with going to the local pumpkin patch in Murrieta. The boys chose their pumpkins and had fun on the rides and in the petting zoo. Since we started "painting" pumpkins last year we decided to do it again this year. I had an amazing idea to make Yo Gabba Gabba pumpkins which is Kameron's favorite show right now. 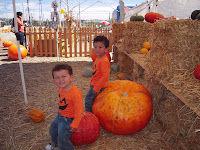 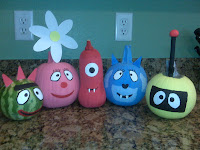 I had so much fun. It was a bit time consuming. Konnor painted the pumpkins and I did the detail work. Kameron was so happy when it was all done. He looks at them everyday, names each pumpkin and giggles. I'll let you in on a secret. Brobee (the green striped one) is actually a small watermelon from our backyard! =)

With the pumpkins was also time to choose Halloween costumes. Konnor of course had his mind set on being an Imagination Mover (Disney) and Kameron chose to be DJ Lance Rock (from Yo Gabba Gabba). I was going to make both of their costumes but I was fortunate to find Kameron's at an affordable price. However, Konnor's costume had to be made. The jumpsuit was so hard to find in the US in a kids size. So I had to order it from the UK. I did all the details on the jumpsuit and he was so thrilled. The boys were it the next day to SeaWorld's Halloween Spooktacular and we got a lot of compliments. Luckily Konnor will be able to wear this costume again when we take him to see Imagination Movers live in concert in December, while we're in Arizona! 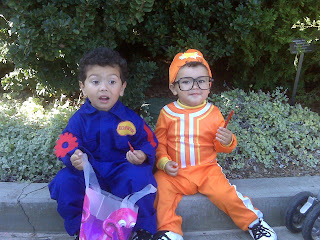 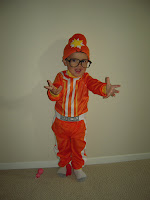 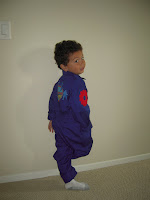 We also had a chance to go to the Air Show (10.02.069) this year. We thought the boys would really enjoy it. And they sure did!
There's more to come in the following weeks and months with us. Stay tuned! I'll definitely post Halloween pics up afterwards!
Labels: brobee costumes halloween imagination movers pumpkins yo gabba gabba