At his 6 month appointment he weighed in at 22lbs, 27 1/2 inches. He's in the 75percentile for his height and 97percentile for his weight. His head is also big! His head is the same size as big brother Konnor's!
Kameron had to get 3 shots at this appointment. He's a trooper when it comes to getting shots though. Maybe it's the thick legs he has which gives extra cushion.
Dr. Boyatt had no other advice or tricks for me to get him to sleep better and through the night. She's very surprised that he's still eating as much as he's eating, but not sleeping through the night. The most he does is 4 hours. After that he's up every hour or two. I'm slowly starting to wean him for the nursing, but it seems to be the only thing that allows him to fall asleep. He does not self soothe. Basically I've become a "human pacifier". I've never had that problem with Konnor so I didn't know how to go about it all.
He's still a little piggie. He can drink 8oz every 2 hours and when he eats baby foods, he eats a whole jar! He never really liked the rice cereal, which I don't blame him. Konnor didn't enjoy it either.
He's still teething, though the two bottom teeth have been surfacing for months now. They should be breaking gum any day now. He's been very irritable and cranky with the teething. He's rolling over and trying to crawl more and more everyday. Poor kid...I think he's just so heavy for his own strength. 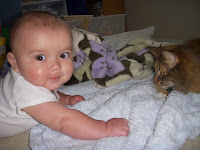