Konnor LOVES Hi-5 from TLC. It's an everyday ritual for him to watch it on tv every morning, then again during the day and sometimes before bedtime. He has been watching them since he was about 3 1/2 or 4 months old. I remember putting him in his bouncer with the tv on Hi-5 while I showered in the mornings. It's wonderful that he still likes the show. He loves listening, dancing and singing along with the show and the CD in the car as well.


When I found out they were touring and would be in San Diego, I told Kevin we HAD to take Konnor! The day had come and I was more excited to take him than he was. Especially that he didn't quite understand...until we got there!

We spent the day being "tourists" in San Diego. We went to Seaport Village. Took a walk along the waterfront, took the ferry ride to Coronado and just enjoyed the sunny San Diego weather. Konnor enjoyed it too.


We got to the Spreckel's theater in San Diego. We waited in the lobby for the doors to open. I never imagined so many other kids would be there. Konnor was a bit overwhelmed too. When the doors opened, we went straight to our seats. We had mezzanine seats, row 1, seats dead center! PERFECT! Konnor noticed the stage was set up just like the tv show. He then started to get excited. As soon as they came out.....Konnor was literally "star struck"! He was so amazed that they were live, in person and not on our tv. He danced, smiled so big, clapped his hands and stared. He paid such close attention through the whole 2 hour show!

Next....Doodlebops in February, which we missed this past March since it was the same weekend as his 1st birthday party. This will be part of his 2nd birthday present. AND...DISNEYDLAND! :-)


Below are some photos and video clips. ENJOY! 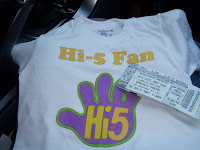 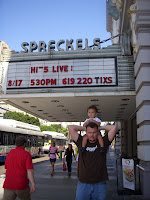 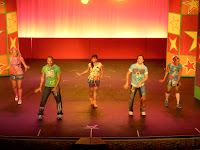