I woke up this morning with the strangest feeling. I felt hungry...even though I had a huge dinner lastnight. There was something telling me there was "something" going on. I got up and got ready to shower. Thinking back on what our cat, Meka did lastnight was stuck in my head. When I got into bed lastnight, I threw the covers on and Meka came and started to get comfy next to me. Nothing strange, she sleeps in our bed all the time. But lastnight she kneaded for at least a minute or two before she layed down. I found it odd. The only other time she had done that to me before going to sleep was when I was pregnant with Konnor.

So as I got ready this morning, I looked at a pregnancy test that was in my drawer. I thought about taking it, but then again said, "Nah...I can't be pregnant." I went about my morning, got Konnor bathed and dressed. Then before I jumped in the shower I looked at the test again and said, "Well...I have been feeling odd lately, and I'm a week and a half late." So I went in the bathroom and took the test. Set it on the counter and before I could even turn around two pink lines appeared! "OH MY GOSH!" My mouth dropped and said, "No way!" Konnor was right next to me and he looked at me seeing me in awe! I put it aside and went in the shower. I came out of the shower and looked at the test again and YUP...still two lines! I was ecstatic at the same time..I was just really caught off guard. My immediate thought was to call Kevin but I decided to do something neat to tell him. But first, I wanted to take a second test.

I had plans to meet Stephanie, Erica and the kids at North County Fair so I told myself I'd stop and get another test on the way home. As I drove to Escondido I was still in such excitment. Still didn't call Kevin cause I knew I'd spill the beans if I spoke to him.

Could it have gotten any more pink? It's DEFINITELY POSITIVE! 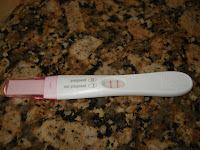 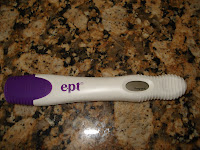 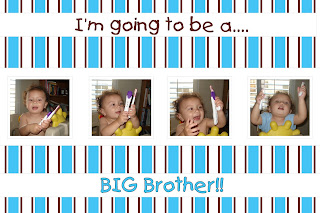