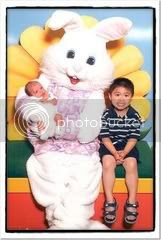 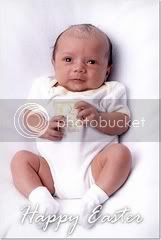 Happy 5 weeks Konnor!
Today we went to Arrowhead Mall for a stroll. (Mama, Papa, Cousin Julian, Konnor and I) Konnor enjoyed the mall so much he didn't want to be in his stroller. He enjoyed seeing the lights and seeing what was going on. We couldn't figure out what he was looking at...later we realized it was the brightness of the lights and the skylights the mall had. Thank goodness there were several of us so we can take turns carrying him. We also had Konnor's first picture with the Easter Bunny and his first studio picture done today. He didn't do too well on the studio picture cause he was a bit cranky and wanted to eat MORE.

Now that Konnor is 5 weeks he's really starting to be more alert. He can focus a bit more and follow voices and noises. Here are a few other new highlights for the month:
-He can hold his head up a lot better now
-Loves to hear music
-Loves being serenaded by Mommy
-Favorite Songs:
-You are the Sunshine of My Life - Stevie Wonder
-You are my Sunshine
-Twinkle, Twinkle Little Star
-ABC's
-Is eating 3-4 oz now
-He can hold his own pacifier
-He has discovered his tongue..so he likes to stick his tongue out
-His eyesight is developing more. He can follow objects and voices better
-Took his first studio picture
-Took his first picture with the Easter Bunny
-Has his first trip planned to San Diego on 2.17.06
-Has his first Las Vegas trip planned for 2.28.06 staying at his Ninang and Ninong's house (Godparents) and attending their Baby Shower for lil' Kaedyn
-Has gained at least a pound. (Haven't exactly weighed him at the Dr yet)
-He burps after feedings!
-He now likes to be carried over your shoulder