Today Mama and Papa De Soto came into town around noon and are going to stay with us for a week. It was exciting for them to visit because we haven't seen them since November. I know how excited they've been about meeting Konnor for the first time as well. Their first reaction when they came in the door was..."Where is he?" At the time he was sound asleep in his swing. The first thing Mama and Papa said was, "Oh my gosh...he's so small." Small? Is he really? I guess he's not as chunky as most of the other grandkids and neices and nephews we have in the family are.

We spent the rest of the day gawking at Konnor, taking pictures, eating and just talking. Mama brought so much food and goodies for all of us. Later that night, Uncle Ed, Auntie Samana and Cousin Julian came to visit as well. It was nice to have everyone together. Being a new Mom has made me appreciate good, quality family time.

Mommy and Daddy's first outing. Although it was only to go to Target...it was still the first time Mommy has been OUT in whats almost 3 weeks. Since I was on bedrest for the later part of my pregnancy I didn't do much except go to my Dr. appointments and to the hospital. Going to the store for some shopping felt like a relief. Though Kevin and I missed Konnor while we were out for an hour and a half....Mama and Papa took good care of him. It's great having them here for awhile..... 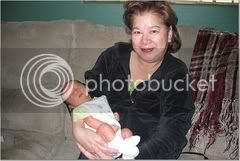 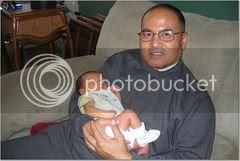 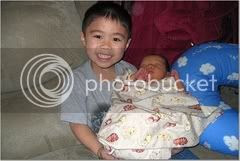 Me ad my cousin Julian. He says I look like an owl and or Yoda when I turn my head.