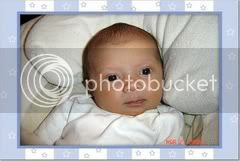 Can you believe it's one month already? Time is going by fast just as all my other Mommy friends have been telling me. In the past month we've been able to learn alot about Konnor, what he likes and dislikes. There are still somethings we haven't quite figured out...like his cries. But for sure we know he's like his Daddy. He loves to eat! He eats every hour pretty much.
As the past 4 weeks have gone by we've seen Konnor grow and develop a personality of his own. Aside from being a fussy baby during the day and a 2 hour sleeper at night, he's determined to hold his own head up by himself at an early age. He is starting to hold his pacifier himself. Next we need to work on holding the bottle! ha ha I enjoy just watching is facial expressions when he's asleep or awake just looking around the room. He smiles most during his sleep. It's just so cute when he does it. He's also discovered his tongue. He likes to stick his tongue out a lot. Daddy is already teaching him his ABC's, although Konnor can't quite repeat them yet. The bad habit Daddy is trying to teach him is to put his finger in his nose! TERRIBLE!
Daddy took Konnor a bath today (by himself). Konnor spent half the morning wide awake. He finally napped around 2pm. Once he woke up he threw a fit like usual. After eating and being changed we tried different things to calm his crying. We learned that not only does he loves his papasan swing, but he loves the vibration of his papasan bouncer too. With both he needs to have the music on with it. If the music is not on he will cry his head off. Since the music is on a timer, he will let us know when the time is up!!